Skip to content
You are here:Home-Physics-Now You Can Really Know Volume Measurement! 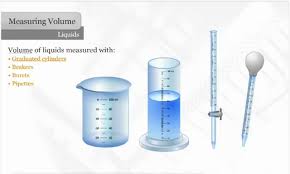 Volume measurement is done with three dimensions in mind. The volume of any object may be determined by multiplying the width by the length by the height. The measurement of volume may also be expressed as the amount of 3-D space encapsulated inside the boundaries of a three-dimensional object.

Certain principles and truths accompany the measurement of volume such as the fact that if two objects are the same in their linear and area measurements, then they will have the same volume. If the object rotates, spins, changes shape in any way, it still does not change its volume.

The International System of Units(SI) has determined that volume will be quantifiably measured by using the base unit of the cubic meter. Further, an objects volume is said to be what can fit inside a container and does not inclue the amount of volume the container uses.

Measurement of volume is also accomplished by determining the amount of fluid displacement. Fluid displacement is explained to be a phenomenon that occurs when an object is immersed in a fluid and that same fluid is pushed out of the way and the space is taken up by the object doing the pushing or displacing. The measured amount of volume is then directly proportional to the amount of fluid being displaced.

Thermodynamics is an area of physics that seeks to understand heat and temperature and how they relate to the dynamics of energy and work.

There are four basic laws of thermodynamics. They are stated as follows:

First Law of Thermodynamics: The law of conservation of energy states that the total energy of an isolated system is constant; energy can be transformed from one form to another, but cannot be created nor destroyed.

Second Law of Thermodynamics: The second law conerns itself with natural processes when it states that the total entropy can never decrease over time for an isolated system. Total entropy always increases and this process is not reversible.

Third Law of Thermodynamics: The entropy of a system approaches a constant value as the temperature approaches absolute zero.

In thermodynamics, the volume measurement actually becomes an important physical quantity for describing its thermodynamic state. The specific volume of an object or system is the objects volume per unit of mass. Volume can be impacted by the state of the object and can be changed according to the external dynamics such as pressure and temperature exerted on to it. 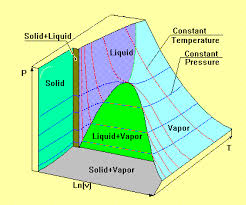