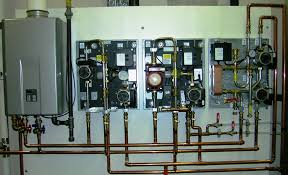 In this chapter of “This Old House, Heating, Ventilation, and Air Conditioning,” the authors plunge into the subject of heating water through hydronic systems. It is important to note the use of hydronic systems is very popular in the northeast area of the US. During the 18th century, it was popular to install boilers, pipes, and radiators. These items created a type of heat that was deemed more comfortable than forced air heat.

Forced air systems force air into the home. They tend to leak and operate with variances in air pressure. Even with these issues, forced air systems are often the method of choice because they are less expensive than hydronic systems.

Hydronic systems use gas, oil, electricity, propane, wood, coal and burn this fuel source inside a boiler or water heater. The steam or hot water is then circulated through the home to a radiator which released the energy into the room.

Very old systems used an ingenious method of piping to regulate the system. A slightly pitched piping system would contain the steam or water until it reached its point of dispensation into the room. An air vent was installed in the radiator which stayed open allowing the heat to enter the room. When the temperature was high enough, the vent would close. As the temperature of the steam or water cooled, the condensate would be redirected back to the boiler through either a one pipe or two pipe system.

Should your home have a hydronic system, the authors provide a yearly maintenance schedule with suggestions about what should be changed out, cleaned, oiled, greased, or tested for accuracy. The chapter also contains a section explaining how to clean and maintain various kinds of boilers.

Radiant floors are discussed and explained. The concept and use of radiant floors hearkens back to the Roman era when pools and aqueducts were used to hold and pipe water into homes. Early American installations of radiant floors used copper or steel pipings embedded in the slab of the home. These installations were done in such a way that the pipes would eventually corrode due to the large amount of lime used in the cement of the slab. Eventually, radiant systems would fail.

The authors explain there are essentially three different ways to install radiant heat.

Finally, the authors discuss what to look for when purchasing a hydronic system and what they should be able to do for certain locations. Wise suggestions are given for this purchase.