Skip to content
You are here:Home-Indoor Air Quality, Ventilation-Surprising Facts About Crawl Spaces 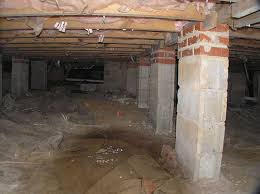 Homes, especially in the Southern areas of the US have crawl spaces. They are similar to basements, but they are usually vented to the outside air. Crawl spaces can be as tall as a regular basement and can also be less than two feet in height.

In terms of convenience, the crawl space is the place where HVAC equipment, plumbing, water and sewer piping can be installed. Installation and possible repairs in the future can be accessed by the crawl space.

Crawl spaces are also notorious for the build up of moisture resulting in the increase of certain negatives such as mold, mildew, dust mites, lower indoor air quality, decreased insulation quality, wood rot, odors, insects, and an increase in heating and cooling cost.

Causes of the Moisture

The culprit in the development of all the possible negatives mentioned is moisture/humidity. The crawl space is full of things that can leak. Plumbing pipes, drain lines, and supply lines can run through it. These leaks can go on for months or years as the space is not often looked into or visited. If the leaks are happening directly on to the dirt with no vapor barrier, then the soil is becoming saturated with water.

The soil that is not covered is absorbing moisture from the crawl space air and any increase of moisture traveling from the outside to the inside. Homes usually have vapor barriers placed on the soil, but this barrier needs to be inspected for loosening, rips and tears, and movement if maintenance work has been done.

The moisture to be found in a crawl space can also come from a migration that can take place from the outside of the wall to the inside. Perimeter drains and damp-proofing is not often done to a vented space and if the outside soil is sloping toward the wall instead of away, the soil will act as a carrier of the moisture to the wall and through it to the inside.

If the home is not fitted with downspouts or gutters, then rain water will find its way to the base of the wall, go through the wall and into the crawl space.

It is also possible for moisture to pass through the vents that have been created in the crawl space walls. The original idea of these vents was to allow the air inside the space to vent to the outside. However, with such high humid conditions in the south, the humid air from the outside makes its way through the opening to the inside.

One of the ways to solve the problem of excessive moisture in a crawl space is to encapsulate the entire space with plastic. This means covering the ground, the walls, and the vents also.

Another way to inhibit moisture is to vent the space to the outdoors if your local climate is not so humid. An exhaust fan can be installed that will vent the air to the outside. You may also install a dehumidifier if the source of water/moisture has been remediated. You may also allow air into the space from the HVAC ducts.