Skip to content
You are here:Home-HVAC Maintenance, HVAC Repair, Tools-Types of HVAC/R Hand Tools That Keep You Employed

Types of HVAC/R Hand Tools That Keep You Employed 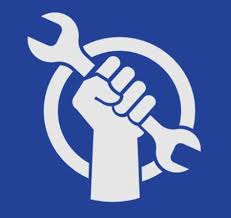 Technicians working in the field of HVAC/R perform a variety of mechanical, electrical, pneumatic, and refrigerating procedures that require a variety of HVAC/R hand tools. These tools are integral to the success of the procedure. Good tools are recommended and they must be maintained at optimum performance levels.

Wrenches are one of the basic tools needed to perform installation, maintenance and repair of HVAC/R systems in the home and on the commercial level. Fasteners, couplings, refrigerant lines, nuts and other parts of HVAC/R systems are made of brass, copper, metal, and alloys that can be damaged easily. It is important therefore, to have wrenches that are of high quality made of hardened steel that can accomplish the task.

The use of wrenches goes back to the 15th century when tools were needed to adjust sections of armor for war and was done by a knight’s attendant. The wheels of coaches and wagons then began to need premade wrenches to tighten the nuts of pulling harnesses, tail gates, and axles. These wrenches migrated to America when people from England made there way here. The industrial explosion of the 19th century then required the expansion of the variety of wrenches to work on machinery.

Wrenches should be precisely machined so that the tool can fit the lines of a nut or bolt head. Socket wrenches are the first go to item because the socket is machined to accurately fit so that no “rounding” appears. Next, box wrenches are the tool of choice followed by open end wrenches. Finally, adjutable wrenches can be used, but care should be taken to provide the right amount of grip and torque. These tools are indespensible in the field. 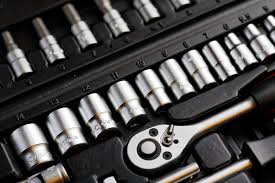 The six or twelve point socket is preferred as it provides greater and more precise coverage over the item to be torqued. This type of wrench has a square drive sized at 1/4”, 3/8” and 1/2”. Of course, metric tools will have metric sizes.

Right next to the socket wrench, but performing the same basic action is the nut driver. It is a direct drive tool that accomodates several different sized sockets.

Box wrenches are usually 12-point and are useful in tight spaces. They are either straight, offset, or double offset. They are double ended with one end being a different size than the other or they may be the same.

This tool is used in small spaces where the tool can be placed on the nut from the top or from the side. It is a one-piece tool with a U-shaped opening that applies force to two sides of a nut. It is double-ended and can be used at a junction or union. 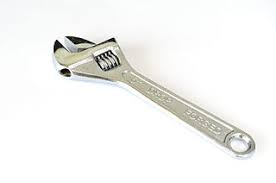 In the US, these wrenches are called adjustable wrenches, adjustable end wrench, and a Crescent wrench. In the UK, they are known as a wrench, shifter, shifting spanner, or an adjustable spanner. It is the most commonly used tool to turn or tighten things.

The following is a list of tools that may be needed in the HVAC/R field: