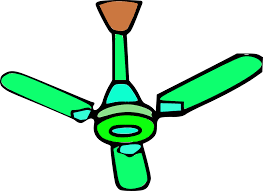 If you have ceiling fans in your home, make sure you are getting the energy savings they can provide you by adjusting the ceiling fan rotation direction. It may be a bit counter-intuitive to think that a device that is often used to cool an area can help you save money in the winter, but it can.

Manufacturers of ceiling fans design them to be multipurpose and omnidirectional. They are designed to move air upward, outward, and downward.

During the winter, you want the fan blades to turn clockwise. Your ceiling fan can help you save money during the winter by working in concert with the HVAC system. Place the speed on low and cause the fan blades to rotate clockwise to create an updraft of warm air. The air will travel up toward the ceiling and then disperse down and back into the living space below.

The warm air will naturally distribute itself more evenly over the space and also allow you to need less work from a furnace or HVAC system. Less heat will be required because more warm air is being equally distributed throughout the living space. Ultimately, this will decrease your energy expenditure.

During the summer, you want the fan blades to rotate in a counter-clockwise direction. This will propel air downward to the living space and create a cooling effect. The cooler air will allow you to set your AC at a higher set point and still achieve a cooling effect.

According to the Environmental Protection Agency, raising the thermostat temperature by at least 1 degree can decrease your energy expenditure by 7-10%.

(Tip: There will be a switch on the side of the ceiling fan motor housing that will allow you to change the fan blade rotation direction.)

Understand that during the summer when you are sending the cool air back down into the living space, this is not actually changing the temperature of the room. You are simply creating an air current that serves to evenly distribute air and the breeze makes you feel cooler due to the law of convection.

So, don’t run the fan when you are not in the room. This is a waste of energy as no one will be in the room to experience the flow of air.

Ceiling fans operate at various levels of manufacturers specifications. They are created to circulate in different speeds and can move different volumes of air in one minute. Air flow is typically expressed in terms of cubic feet per minute(CFM). Powerful ceiling fans have a high CFM rating and slower fans have a lower CFM. The efficiency of a ceiling fan is also expressed in comparison to CFM per watt.

The goal is to get the most air moving for the least amount of money per watt. So, search for ceiling fans that have a high CFM per watt and you will be saving money over time.