Skip to content
You are here:Home-Physics-Who Else Wants to Know About the Four Physical States of Matter?

Who Else Wants to Know About the Four Physical States of Matter?

Within the laws and principles of physics are the definitions of the four physical states of matter. These states may be observed and are based on the differences in the properties of matter. The four primary states of matter are liquids, gases, solids, and plasma. These are made up of molecules that change their behavior as the elements of heat content, pressure, and temperature are exerted on them.

Solids are defined as being in a condensed phase because the microscopic particles that make them up are close together, maintain a definite shape, and are rigid. In a solid, the particles are packed together and it has a precise and consistent volume. The only way to change the state of a solid is by some outside force.

Particles that are in a liquid state are said to maintain their volume but can vary in shape based on the size and shape of the container in which it is held. The particles are close together but can move next to each other or slide about.

If temperature and pressure remain the same, then liquids will stay in their present phase/state. Solids have melting points and when this melting point is achieved, the molecules begin to spread, slide, and move.

The critical temperature is defined as the highest temperature at which a liquid can maintain its current molecular structure.

Gases are variable in volume and shape. Particles of a gas are mobile, not close together and do not stay in the same place. There is no consistent pattern of molecular structure. The space or distance between molicules in a gas is greater than the size of the actual molecule. Gases that are below their critical temperature are said to be vapors and can become a liquid by compression. 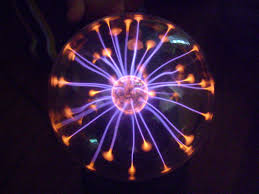 The molecular structure of plasma is similar to a gas in that it does not take on a specific volume or shape. A plasma can conduct electricity and produce magnetic fields. In a plasma, positively charged nuclei exist inside an area of electrons. This field allows for the conduction of electricity.

It is essentially, illuminated matter in a plasma state. Plasma can be generatre by different expressions of light such as lightning, fluroescent and neon lights, sparks, and the plasma bursts viewed on the sun that emit photonic and readiation molecules.

In addition to presenting in these four states, matter is also said to undergo transitional phases leading from one state to another. Phase transitions introduce changes in structure, shape and properties. Each one of these phases is expressed as a mesophase.