Skip to content
You are here:Home-Furnace, HVAC Maintenance-Foolproof Pilot Lighting

The Anatomy of the Burn 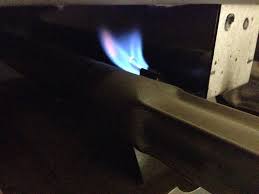 Burners in gas furnaces are lit electronically or by a pilot flame. The pilot light is commonly found in older units that have an AFUE of less than 80%. When the flame goes out, the unit does not provide heat. So, it’s important to know how to relight this device so the house and its inhabitants are warm during the winter.

A deeper look into the thermocouple reveals two metal wires welded at the ends and covered with a metal case. The sensor is placed directly into the hottest part of the flame and the other end of the sensor is connected to the pilot valve body.

When the thermocouple heats up it creates a small amount of electricity. This electricity is sent via a solenoid that is controlled by a 24-volt transformer. It all comes together to either send more fuel to the flame or stop the flow of fuel.

If your unit has a red reset button, that is the place to start. Turn the gas valve from off to pilot.

Depress and hold the red button at the pilot position and listen for the gas to flow. You will want to hold the button down for at least 30 seconds. This will allow the thermocouple to get hot enough to open the valve and continue sending a fuel source.

Place your match or extended lighter at the opening of the gas line where the pilot should be lit. This action should create the flame. Once the pilot remains lit, move the knob from pilot to the on position. You should see the burners begin to ignite. (If the pilot does not stay lit, then repeat this process until the thermocouple is hot enough to continue sending gas.)

If, after trying several times the pilot will not stay lit, you may have a thermocouple issue or a gas flow problem.

Color of the Flame

If you see a low flame, then it may be necessary to adjust the flame height. There will be a set screw for this. If you encounter a yellow flame, then there is a lack of oxygen to the burn. This may be caused by a dirty or clogged pilot tip. If the flame is split, then you may have to clean out the pilot tip. A flickering or wavering flame is the result of an inappropriate draft of air.

Lighting the pilot is something that can be mastered by anyone in the household. However, if after many attempts the furnace still will not light, it is wise to consult or contact your local HVAC provider for a service appointment.